We’ve all been there. We are the new student and we walk into a room full of yogis who start chanting and using all these words you have no idea what they mean like chaturanga and namaste. You’re not alone. Even those who have been practicing for years had to start somewhere and learn these common yoga phrases.

Below is a list of common yoga phrases that can trip up new yoga students. It is by no means an exhaustive list but it will help you to better understand key yoga terms as well as when you’ll likely hear them in a yoga class. Who knows, maybe you’ll end up getting your yoga teacher training and start using these terms with your own students someday.

in your daily life 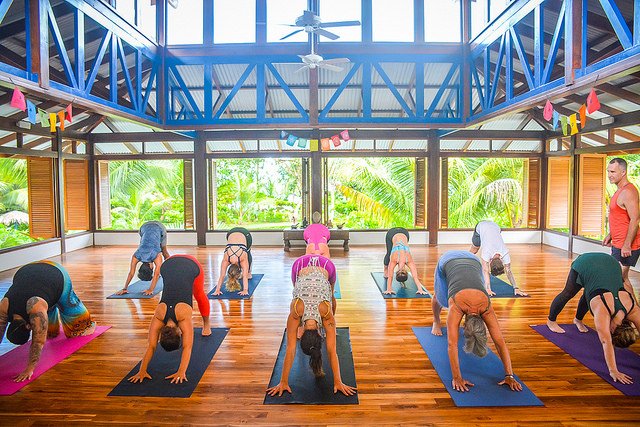 Patanjali, one of the great yogis, defines asana as “to be seated in a position that is firm, but relaxed”. Seated is a term that can be broadened to mean still or motionless. Asanas can also be used as physical exercises where they are often referred to as yoga poses. Many of the common poses you hear end in the phrase asana, such as tadasana (standing/mountain pose), savasana (sleeping/corpse pose) and trikonasana (triangle pose). Asana is one of the eight limbs of yoga.

The word asana will be commonly used in yoga classes when referring to a yoga pose. In Western yoga classes, you are primarily practicing yoga asanas as you move throughout different yoga poses and postures.

Literally translating to “bond or arrest,” these are body locks used to regulate the flow of prana through the body referred to in the Hatha style of yoga. There are 3 bandhas that you’ll hear:

Bandhas are used to block energy flow to certain areas. Once the energy is blocked and built up, it is released to flow more strongly and flood the body with energy. Physically, the bandhas help keep your hormonal, sexual, metabolic, and digestive systems (among others) healthy. In a spiritual sense, they help to work on consistent single-pointed concentration, steady and long breathing, and a calm, clear mind.

The 7 chakras are locations in the body which energy flows through starting at the bottom of the spine all the way up to the top of the head. In a healthy body, the 7 chakras are all balanced and energetically in harmony. If not, then problems can occur. The 7 chakras are:

Certain poses or daily actions can help clear blockages or balance the energy of specific chakra points. For example, camel pose is very good for opening the heart chakra. Also practices of self-love such as compassion and gratitude during meditation can help to balance and strengthen the heart chakra.

A yoga posture, also known as a low plank or four-limbed staff pose, in which the body is straight and parallel to the ground and is supported by the toes and palms, with elbows at a right angle.

It is a transition pose between a high plank and upward facing dog, common when practicing sun salutations and vinyasa flows. This pose helps to strengthen the whole body from arms to core to legs. 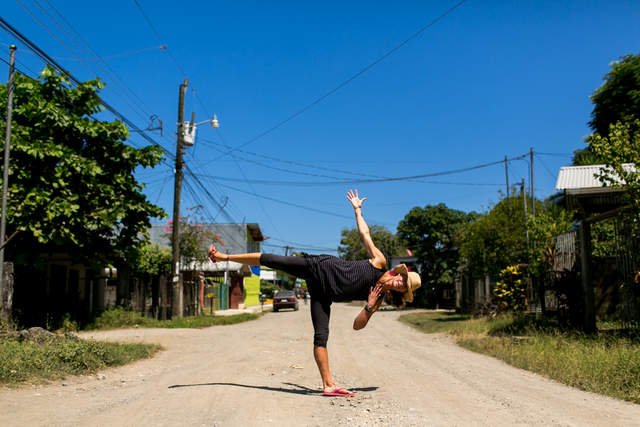 Drishti means a focused gaze or concentrated intention. It relates to the fifth limb of yoga concerning sense withdrawal, as well as the sixth limb relating to concentration. It is easy to associate with the saying “where focus goes, energy flows.” Therefore, if you concentrate on an intention or action then you are more likely to have it manifested in your life.

Drishtis are used to physically help students to focus on a particular point to help with balance in standing postures. They can also be used to help mental focus and with achieving goals by choosing a concentrated intention in life.

The act of straightening the spine and reaching up or out with the crown (or top) of the head.

This is a queue for students to focus on keeping the spine long and straight. It helps to protect the spine from injury as well as to strengthen and realign the vertebrae.

The act of breathing out, typically in a prolonged and controlled fashion.

Exhaling helps to release tension so you can more easily move deeper into a pose. When first practicing yoga, it is common for students unintentionally hold their breath as they are moving. This is a gentle reminder to continue breathing as you are moving through the practice. 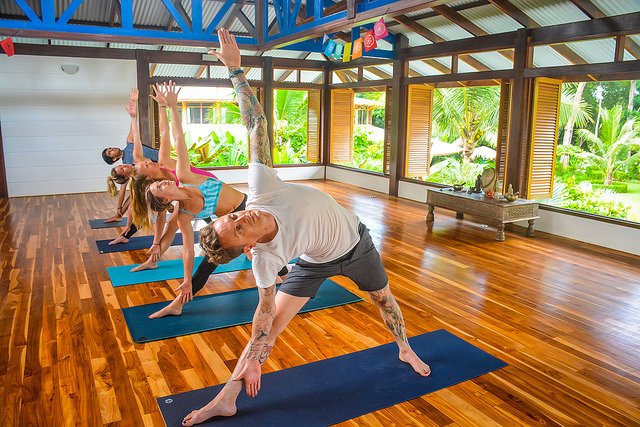 Fascia is the thin tissue that encloses a muscle or other organ. This fibrous tissue tends to be tight and yoga helps to loosen and relax these fibers for increased mobility.

It’s common for yoga teachers to focus on stretching the fascia in side body stretches such as triangle pose and side angle. This can especially come into play with breathing in side stretches as deep inhales will expand the rib cage and stretch the fascia around the ribs and internal organs.

The act of breathing in, typically in a prolonged and controlled fashion.

Many teachers will remind you to inhale in several situations during yoga classes:
Before moving into yoga postures
Expanding before moving deeper into a posture
When moving out of yoga postures

A queue for students to twist limbs such as arms or legs so that they rotate towards the centerline of the body.

You’ll hear instructors use this if they want you to open up space in certain areas of the body. Typical postures in the West leave desk workers with lower back problems. To counteract this, for example, in wide legged forward fold, you may be asked to focus on rotating their thighs inward. This will help you to increase the range of your forward fold and stretch your lower back.

A saying or chant that invokes a certain feeling, deity or empowering emotion.

Mantras, such as om, can be used in conjunction with yoga classes or on their own in your daily life

when you need a reminder or incantation.

Mudras can be used in conjunction with mantras and breathing exercises to invoke powerful emotional releases and energetic qualities. Common mudras include touching together the thumb and pointer finger to make an OK sign and hands at chest level in prayer.

A Hindi word that literally translates into “bowing to you”.

It is a sign of respect and admiration typically exchanged by yogis and students at the beginning and end of class.

Om is a chant commonly referred to as the “sound of the universe.”

It is used at the beginning and end of yoga classes or mantras to bring a sense of grounding and presence.

A queue for students to twist limbs such as arms or legs so that they rotate away from the centerline of the body.

You’ll hear instructors use this queue if they want you to open up space in certain areas of the body. Poor posture can create problems such as hunched shoulders. For example, in Warrior 2, your instructor may encourage students to focus on outwardly rotating their biceps. This will help to bring the shoulders back and down to create more space in the chest and upper body. 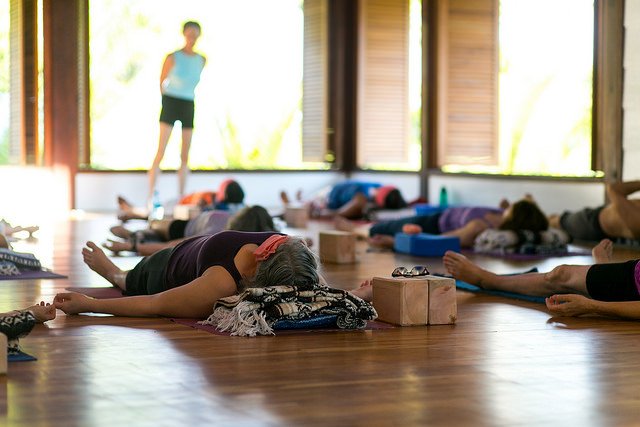 Noticing these 4 stages helps to enhance physical awareness and to force introspection therefore, becoming helping to further along practitioners on the path to enlightenment.

Pranayama techniques such as alternate nostril breathing or kundalini breathing can be used in any yoga class to help regulate the flow of energy through the body. Pranayama is more commonly incorporated in the Ashtanga and Hatha styles of yoga.

The two pointy bones under the flesh of your buttocks.

In seated postures, you may be asked to adjust the flesh around your buttocks so that you are sitting comfortably and evenly on their sit bones.

This classic sequence is beneficial for blood circulation, respiratory health and digestion.

This sequence can be used at the beginning of yoga practices to warm up the body or practiced repeatedly as a practice of its own.

What other yoga common yoga phrases do you hear that we didn’t cover? Let us know in the comments below! 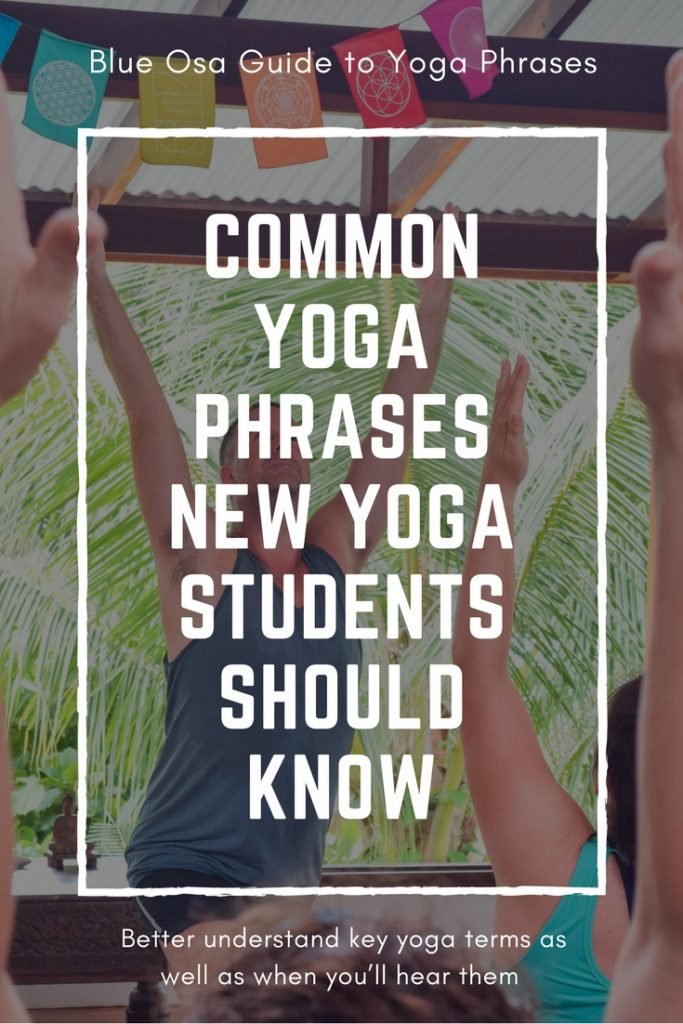