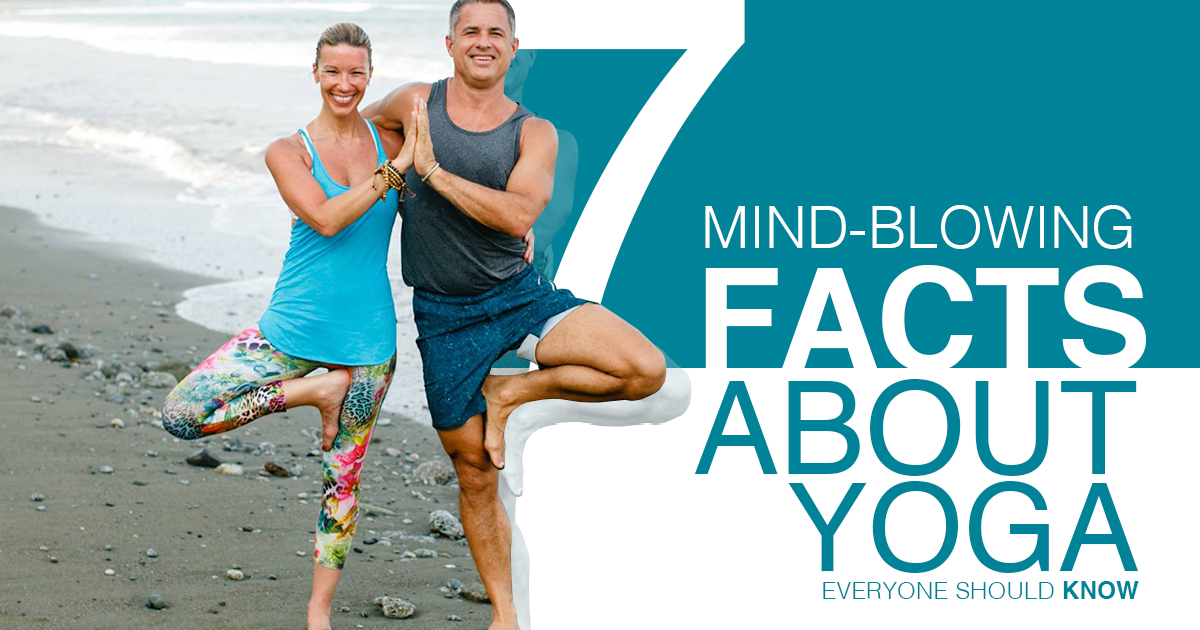 7 Mind-Blowing Facts About Yoga Everyone Should Know

There are many facts about yoga that people don’t know.

For example, it’s estimated that some 36 million Americans practice yoga. That’s a pretty significant number. What’s even larger is the amount they spend annually on yoga products—$27 billion USD! And that’s just in one country. (That number continues to grow!)

And believe me, I love that yoga has and continues to be on the rise.

I also honestly believe the world would be a much happier place if everyone incorporated a bit more downward dog into their daily lives. With amazing teacher training programs, you can deepen your yoga teaching skills, focus on yourself in a peaceful setting, draw out positive energy, and immerse yourself in a life-changing experience. Not only can your technical skills improve, but you can become an inspiring, motivational instructor that can lead others. Join one of our teacher training programs today to enhance your skills, become a better you, and inspire others!

With the rise of yoga’s popularity in the West, there comes an increase in misconceptions and confusion about yoga facts.

So what is yoga really all about?

Take a moment to make sure you’re up to date on these mind-blowing facts about yoga. You might be surprised at what you learn!

7 Mind-Blowing Facts About Yoga Everyone Should Know

While, yes, yoga is growing wildly in popularity, this isn’t just a brand-new fad that will fizzle out in a few years. Yoga’s been around for millennia.

Yoga’s global popularity is unprecedented, with yoga retreats and studios on the rise around the world. Whether it’s a sweaty hot yoga session or a relaxing, restorative class, everyday people are donning their Lululemon and dropping in to see what all the fuss is about.

So maybe yoga has become a bit of a craze, but the ancient tradition of yoga is more than a fitness trend alone.

A fun fact about yoga is that the tradition of yoga dates back nearly 5,000 years to the time of pre-Vedic Indian traditions.

We then find yoga to be the central theme of the Bhagavad Gita, a Hindu scripture appearing around 500 B.C.

Further development of yoga emerged roughly around 100 B.C. At this time, Patanjali wrote the Yoga Sutras in an attempt to define and standardize classical yoga.

It was the esteemed Swami Vivekananda, an Indian Hindu Monk and mystic, who is credited for bringing yoga to the Western world in the late 1800s. His message, that all beings are an embodiment of the divine self, remains a focal element of the practice today.

As yoga continues to grow and become more mainstream, its uses will continue to change and evolve. The fact that yoga is more than just a fitness fad is clear because those who experience the powerful mind-body-spirit transformation that yoga brings, continue to be forever touched by it.

Savasana is that signature pose at the conclusion of every yoga practice. And if you’re anything like me, then you’re guilty of slipping out of class to carry on with your busy life the moment the teacher instructs you into it. I always knew Savasana was important, but it’s only recently I learned why.

An interesting fact about yoga is that Savasana, also known as the Corpse Pose, is a pose of ultimate relaxation, which is why it is so difficult for many of us to release into the pose. While in Savasana, your mind and body are calm. You allow your body to de-stress and return to its natural state as a human being and not a human doing. Your body also cements the effects of your yoga practice, processing and remembering the information it needs.

Finally, Savasana is the ultimate form of rejuvenation, healing, and relaxation for the body. If you only learn how to do one yoga pose, make it Savasana.

The healing benefits of yoga are not only about relaxation and focus, they are also multi-purpose.

Today, yoga is known to positively affect the physical, mental, and emotional well-being of medical patients. The practice of yoga is being incorporated into many health centers as a complementary treatment for illnesses.

Yoga Fact 3:  When in doubt, come back to one-to-one breathing.

An important yoga fact to know is that learning to breathe is one of the most powerful things you can do. Not only does breathing supply us with our life force, but oxygen is also responsible for eliminating waste and toxins, bringing oxygen to the blood and the brain, rejuvenating our organs, and reducing stress, anxiety, and disease…and that’s just the start!

It’s hardly any wonder the ancient yogis devoted serious time to understanding and practicing the relationship between the inhale and exhale.

There are numerous Pranayama (breathing) exercises, some of which are very simple and others that should only be practiced under the guidance of a teacher. However, if you only learn one breathing exercise, make it one-to-one breathing.

How to practice one-to-one breathing?

One study found that the emphasis on deep breathing in Iyengar yoga helped individuals suffering from depression and anxiety. So, next time you find yourself about to lose your cool, break out the one-to-one breathing first and then see how you feel.

Yoga Fact 4: No one cares how awesome you look in your postures.

Believe it or not, an interesting yoga fact is that no one really cares what you look like in your Revolved Half Moon pose. Maybe you’re capable of bending in ways that the mind previously couldn’t have imagined possible or maybe you can’t even touch your toes. It really doesn’t matter. Yoga is for everybody, and because of that, the way you move in and out of the different postures will vary according to you and how you are feeling on a given day.

Undoubtedly, yoga improves flexibility and posture and helps to prevent injuries by strengthening core muscles used for support and weight-bearing, but those abilities are not required to start yoga.

When I tell people I’m a yoga instructor, the number one thing I hear is: “I’m not flexible enough for yoga.” When it comes down to it, the most important yoga fact to remember is yoga is about the flexibility of the mind, not the body. We all start from somewhere. Wherever you’re starting from today is exactly where you’re supposed to be.

Yoga Fact 5:  Speaking of postures, yoga is more than just moving from one pose to the next.

Yoga poses are powerful, poignant, and beautiful, especially when expressed thoughtfully and with proper alignment.

However, the fact is that yoga is not about asanas (postures) alone. Yoga’s ultimate contribution to our wellbeing is the unification of body and mind into a state of flexible and activated focus.

Some yoga practices like Ashtanga Yoga or Bikram Yoga (also known as Hot Yoga) originated as a practice of discipline, breathing, and the repetition of poses intended to purify the system.

There are over 100 different types of yoga in practice today. So, it’s certainly possible to find the type and approach that’s right for you.

According to Yoga Journal, yoga has six branches of classic practices, including hatha yoga, raja yoga, karma yoga, and more. Each branch comes with unique functions that represent a different approach to life. These practices appeal to many yoga practitioners, and they integrate the spiritual and emotional elements people are looking for.

“Yoga is the fountain of youth – you’re only as young as your spine is flexible.”It’s a quote that’s been floating around yogi Pinterest boards and quote walls for a while. But there is a verifiable essence of truth to it.

A fascinating fact about yoga to note is not only does yoga keep your spine young and flexible, but it also directly correlates to numerous other health benefits.

Yoga might not actually make you younger. (Sorry folks!) BUT according to the United States National Library of Medicine, a combination of yoga and meditation does help slow the aging process.

Yoga Fact 7:  How you act on the mat is how you act in real life.

It’s true—your yoga mat is a dress rehearsal for real life. How we act while on the mat is a mirror for how we will handle both negative and positive experiences in our lives.

When we sit with our discomfort on the mat, slowly, we begin to sit with the discomfort in our lives—and then we can understand why it’s there in the first place.

And our ego?  When we begin to let that go, that’s when powerful transformation can really happen.

It’s clear that people are feeling a need to connect more deeply with life’s experiences and practicing yoga makes it possible. The numbers alone speak for themselves.  In 2016, nearly 53,000 yoga teachers registered with the Yoga Alliance and over 36.7 million adults were actively taking regular yoga classes.

Don’t roll up your yoga practice with your mat; instead, take it out into the world and live your yoga every day!

Dive Deeper Into Your Practice At The Next Teacher Training

Pin it for later!