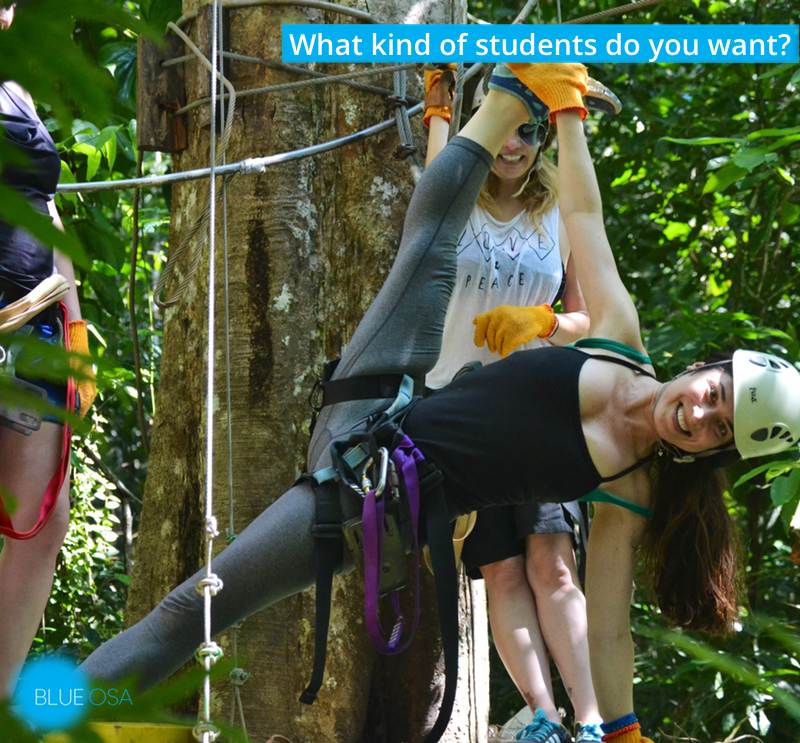 Home › What Kind of Students Do You Want?

What Kind of Students Do You Want?

I have been blessed with a successful yoga career. Some of my students have followed me–not only over a long period of time–but all over the world as well.

The success of a yoga teacher is dependent to some degree on the students they draw. So one of the first questions I had asked myself when I started teaching yoga was,

“What type of student do I want to teach?”

This question might shock some yoga teachers as there is the notion in the yoga world that, as yoga teachers, we should want to teach everyone and anyone.

But what I came to realize was that I did not want to teach just anyone. I wanted to teach students who could follow the same path as I am on.

The idea of who your students are is not only important as you develop your yoga career, but even more so as you develop the yoga retreat part of your business.

Yoga retreats can be very energizing, rewarding, and transformational if you have the right group of people traveling with you. But if you have a group of people joining you, half way around the world, that does not share your yogic values, your retreat will not have any of those qualities I listed above.

I have always had remarkable students because I have been consistently clear about the kinds of students I have wanted to attract.

The kind of students I want to attract to my retreats are:

On a yoga retreat recently at Blue Osa, group leader Jennifer Pastiloff gave her students a charge the first night of the retreat before dinner.

“Leave your shit behind. Put it into the fire.”

Never before had witnessed such direct leadership to a group of students before.

And I had never experienced such a deep level of transformation as I had witnessed by the end of that week.

I have witnessed yoga teachers who put themselves into the category of Julie the “Cruise Director”. They then finish their retreats feeling disappointed, energetically depleted, and absorbed into their student’s stories.

You as a yoga teacher have the opportunity to change lives and impact your students profoundly as a result of the work that they do during the retreat you lead.

Plan Your Next Retreat At Blue Osa

Are you looking for some space in your life to transform — to kick old habits and reclaim a feeling of personal empowerment?

Have you ever considered becoming a yoga teacher?

If the answer is YES! We cordially invite you to join our next Blue Osa Online Yoga Teacher Training 200-Hour Certification. Take me to the online training. I want to learn more!

Are you struggling to uncover your purpose?
Seeking insight and understanding?
Do you need time and space to find your truths and replenish your spirit? The the Blue Osa
28-Day Immersion
Life Transformation Training is for you! Join the next one!

This 300-Hour Yoga teacher Training immersion training at the Blue Osa will immerse you in the specific transformational skills and yogic practices you need in order to connect with your higher purpose and offer it to your classes (should you teach), your community and the world.