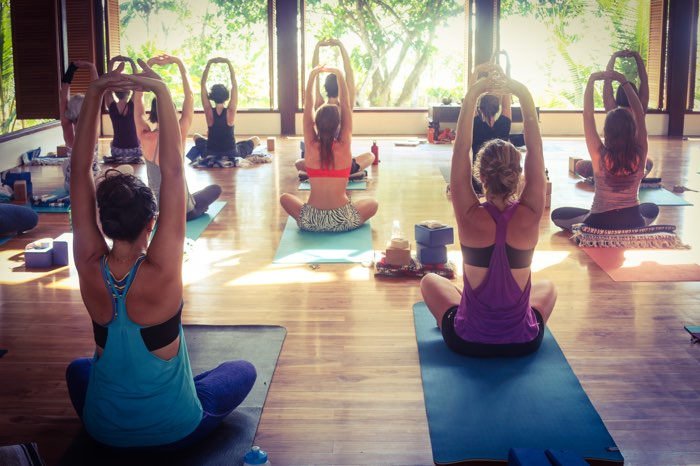 Home › A Month On the Mat Part 2: Yoga Lessons at Blue Osa

A Month On the Mat Part 2: Yoga Lessons at Blue Osa

For anyone who is not already following my journey, these posts represent a chronicle of my first steps into yoga.

To quickly recap, I arrived at Blue Osa Yoga Retreat and Spa with the intention of throwing myself into something that I had openly rejected and at times even sneered at without ever having the slightest understanding of what any of it meant or entailed…namely yoga. My last post recounted my first impressions of Blue Osa, in this excerpt I’ll describe my first two weeks getting to grips with my hips!

It felt like I was sitting in frogs pose for half a day. So when my instructor Sunny finally tells the class we can take a child’s pose I flop to my mat in a grateful heap. My hips are singing! But now I’m faced with another problem. Whoever thought child’s pose could be such a struggle? As I understand things, it’s designed to be a resting pose, a sanctuary your body can collapse into to take a breath, but here I am grimacing, with sweat trickling down my face, stinging my eyes. Behind me Sunny gently pushes down on my hips trying to open them that last little inch further to the mat. Finally, she takes pity on my creaking joints and girly whimpers, and offers me a soft block to rest my forehead on, instantly relieving the tension around my hips and pelvis. So that’s my first official misconception of yoga dispelled – yoga is most definitely NOT just for girls. 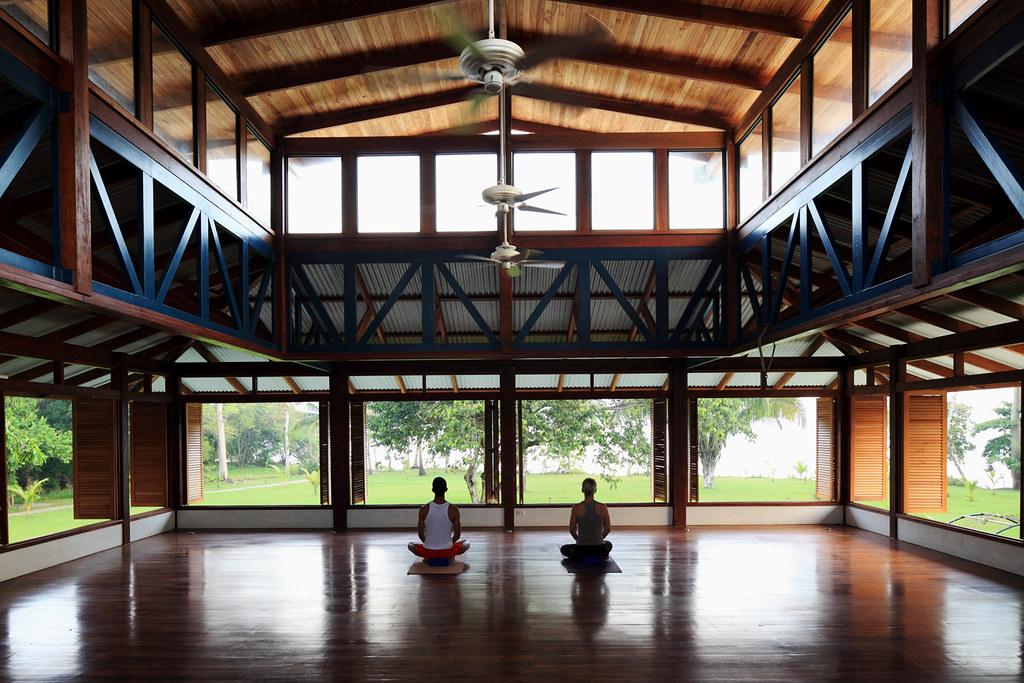 The beauty of Blue Osa Yoga Retreat is the diverse range of yoga it offers. Yoga instructors arrive here weekly with their retreats while volunteer teachers arrive for longer stays on a less regular basis. In the last two weeks, I have attended classes with four different instructors, each one different in style, each one equally brilliant in their own right. But it’s not just the yoga that comes in different flavours; the different retreats that arrive through Blue Osa’s doors often bring with them different themes and workshops in tow.

In my first week I was treat to the wonderful Sheila whose retreat was attended by a Dharma monk! Not only did my daily schedule include a morning yoga class and an 8pm evening restorative class perfect for preparing you for your pillow (especially listening to Sheila’s beautiful voice singing a closing prayer in savasana) but I was also invited in to listen to a Tibetan Lama monk give enlightening talks on meditation and Buddhist teachings. I literally couldn’t believe how lucky I was to have arrived when this experience was available in my very first week. It almost seemed too perfect!

So imagine my disbelief when on Sheila’s final night, I meet Dave and Kate, the leaders of next weeks’ retreat arriving a few nights early to set things up for their incoming students, and I’m told that their yoga comes with a writing workshop, as this is what Dave specialises in, teaching others to write. It’s like this month has been especially tailored to suit me; an aspiring writer and a novice yogi!

I’m feeling good. Sheila’s class has broken me in nicely and I’m starting to grasp the different asanas and flows, sun salutations and inversions. Yoga doesn’t feel so alien to me anymore. My body has responded well and my energy level is high, despite the early 6 am wake ups since I’m going to sleep nice and early. I’ve found a routine that works nicely for me. I’m tight, toned, and ready to flow! 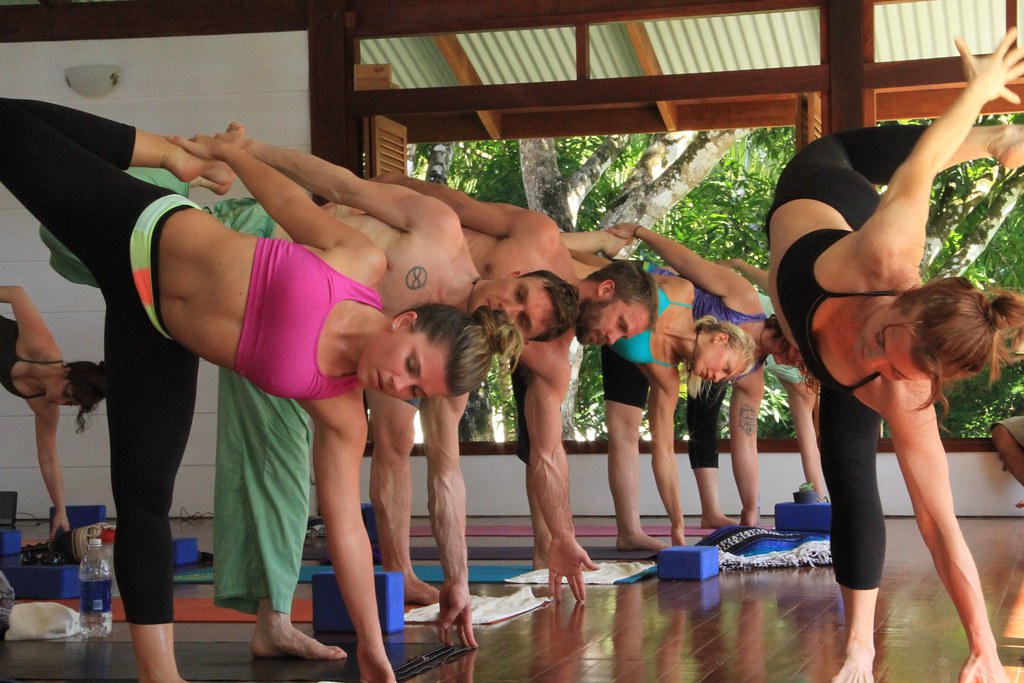 Growing More Than Ever

Or so I thought. Week two begins, and my first class with Kate and Dave gave me a little window into the week I had ahead of me. Again, I loved it! Being the opening class it’s taught by the two in tandem which shouldn’t work but somehow inexplicably it does. It’s like they have a telepathic link, or they’re identical twins only instead of finishing each other’s sentences, Dave jumps in to take the reins a millisecond after Kate finishes without missing a beat! They read each other so well! Like Sheila’s, the session is one and a half hours long but as we press our hands to heart centre to close out the class and I hear Dave proclaiming the session to be a slow warm up in the interest of breaking us all in gently, I look down at the pool of sweat glistening on my mat and I’m forced to wonder.

I wasn’t wrong. As expected the learning curve is steep. For a start, the flow is at a much quicker pace to what I had become accustomed to in Sheila’s class. When I start to encounter poses like warrior 1 and 2 the classes quickly become a new challenge. After their tandem class on the opening day, Dave and Kate stagger the rest of the week. Dave’s class is more of a flow where Kate’s often became a work shop. Regardless of who is sitting at the front of the room, they’re both tough. Within days I’m attempting hand stands and other inversions, side crows and wild thing. Dave’s afternoon yoga and writing workshop set at 4pm is an interesting fusion of flow and dharma talk mixed with some handy literary pointers. Designed to get those creative juices flowing by opening up our hearts and minds to allow the words in. It also serves as another gruelling way to get those already sore muscles moving again. But what fun I was having in the process!

With two diligent instructors looking out for me I received enough adjustments to my posture and whispered instructions in my ear that those asanas I’d thought impossible only yesterday were suddenly feeling that little bit easier. My confidence was growing day by day. I no longer considered myself a complete novice on the mat, I came to realise that it was all down to our own individual bodies. What I found difficult, others found easy, but the same also applied in reverse. I just needed to keep working and practising every day on the mat and eventually I’d open up those troublesome hips of mine! Which is where I find myself now, attending Sunny’s class, sitting in frogs pose… again, but maybe, just maybe, and whisper it softly now, could it be this time it feels just a little bit easier?

Start Your Own Journey: The One-Month Immersion Yoga Teacher Training