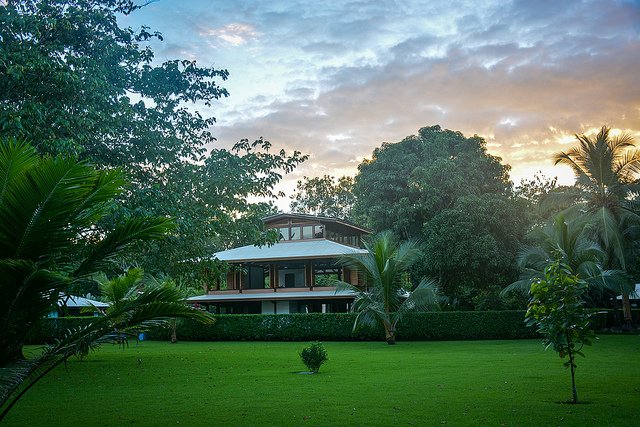 Home › A Month On The Mat Part 1: Yoga Lessons At Blue Osa

As I arrived at the gates of Blue Osa Yoga Retreat + Spa – my home for the next month – my mind was a whirr to what might lie on the other side. With the opportunity to take my first tentative steps into the world of yoga set out before me, I made a mental promise to myself to open my heart and my mind, and embrace whatever I found lying beyond those doors. I took a big deep breath…and walked right in.

A First day in Paradise

First impressions count a lot for human beings. We’re built that way, unfortunately, and although making snap judgements or assumptions on a place or a person can be unfair, and often come back to haunt us later, it’s often easier said than done to not judge a book by its cover. Lucky for me then, not only does Blue Osa Yoga Retreat make a mind-blowing first impression, it also just keeps on delivering!

The first honorable mention here goes to the staff. To Jorge, who checks Holly, my fiancé, and I in to the resort. After welcoming us in and providing us with a late breakfast to enjoy after our early morning flight with Nature Air, he naturally moves on to the nitty gritty formalities of asking for passports. Hol produces hers with a smile. My face is a colorless canvas with a rictus-like grimace slashed across its surface. I can’t remember seeing my passport since I tucked it into the pocket of the plane seat in front of me for safe keeping. It’s still in there with the safety cards and duty-free catalogues, albeit probably at 15,000 feet and en route to San Jose! Jorge doesn’t bat an eye. He’s actually a lot more understanding than Hol is at this moment! From that point on I don’t do anything until Jorge places my passport back in my hand the following morning! Now that’s what I call customer service! 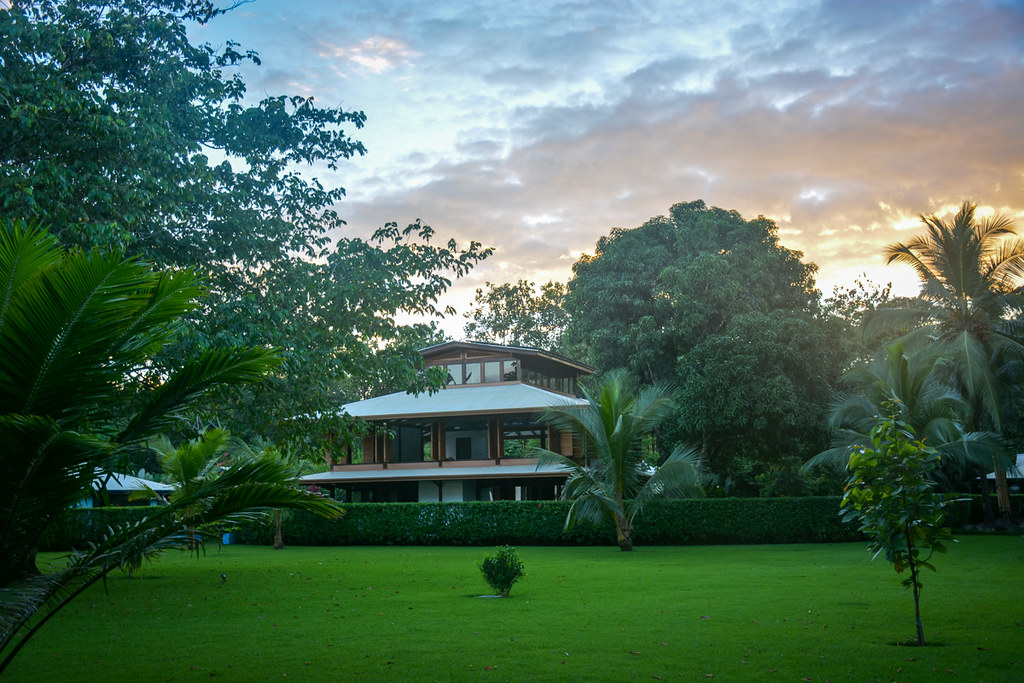 Once checked in, the immediate lure is, of course, to begin exploring! Set in the middle of the jungle, brought home by the haunting echoes of the howler monkeys drifting in on the wind, the grounds of Blue Osa Yoga Retreat and Spa are a Feng shui dream. Every part works and compliments the other to form a peaceful whole. From the open and airy communal area that looks out onto a lush green garden with its huge Guava Tree center piece, to the Balinese beach-hut style meditation temple, and the large open windowed yoga deck with the Pacific Ocean crashing hypnotically in the background. A stroll through a tunnel of fragrant pink flowers brings you out into the pool and spa area, where guests can choose to either bake in the sun, retreat beneath the overhanging foliage to relax in the shade or leave the sunbathing for later while they stretch out on a table to get their stresses rubbed out of existence.

Having absorbed the retreats’ immediate grounds, Hol and I follow the little stone path the short way down to Blue Osa’s almost private beach. Stretching out for miles in either direction, the long crescent shaped beach is usually completely deserted. Exploring it transports you into the shoes of Robinson Crusoe, walking in solitude across its tranquil sands, that is until four long tailed red Scarlet Macaws break from the undergrowth and streak down the beach towards us, flying in formation, squawking loudly, shattering the peace as they go. If this doesn’t give you a sense of the place, then nothing is likely to. You are literally in paradise. 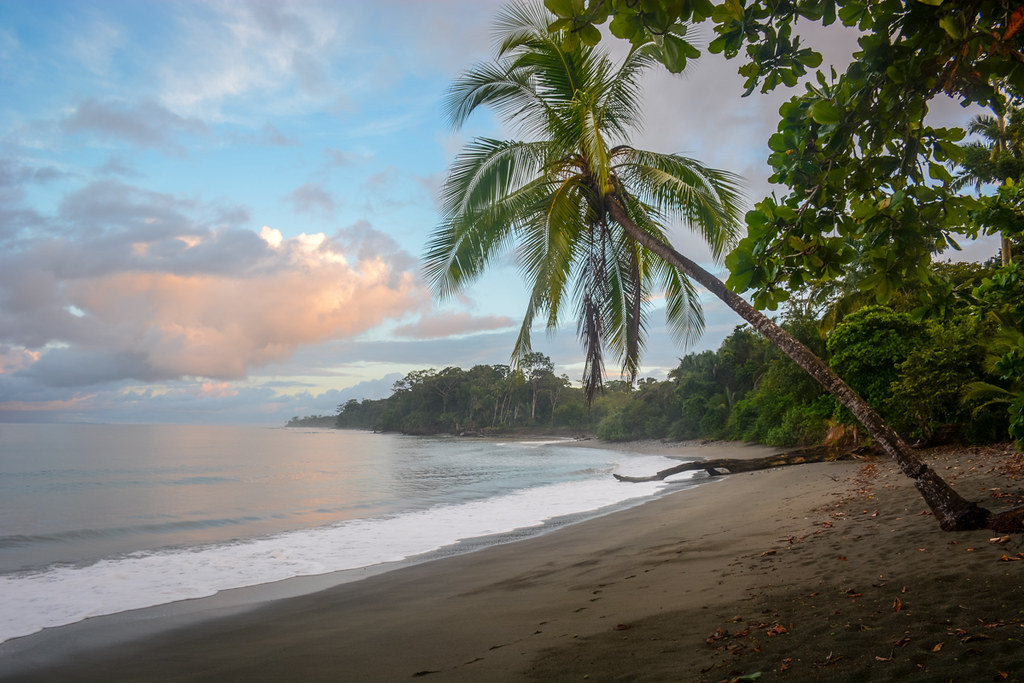 Which leaves one final – and maybe the most important – first impression. The reason above all else as to why I’m here. Having been completely unreceptive to, and at times openly negative about yoga, I decided to finally experience it so that at least I had a frame of reference to form a basis for my skepticism. Grabbing my yoga mat, I ventured out to the deck to take part in my first class. This week’s instructor, Sheila, proved the perfect medium to ease me into the groove. As I sat at the back of the room, trying to fade into obscurity while everyone else confidently transitioned from pose to pose, Sheila was not shy to venture out amongst her flock to make corrections and offer handy tips. When she stopped behind me as I tried fruitlessly to force the soles of my feet to the floor during downward dog – nearly snapping my hamstrings in the process – a few quiet adjustments with minimum fuss suddenly eased all the pressure. Before I knew it, instead of sweating and grimacing with my muscles spasming at every step, my breathing was controlled, my core was activated, and I was picking it up. Not only was I doing it, I felt relaxed and focussed in the process. A one and a half hour class sounds at first like a long time to be engaged in exercise, but after the initial half hour of getting to grips with the basics, I was surprised not just by how quickly the time elapsed, but mostly how easy it was for me to really let go. As I lay on my mat during Savasana, back to the floor, eyes closed, Sheila’s beautiful voice echoing around the studio as she sang the words of a closing prayer, I felt a mix of what should probably have been conflicting emotions. On the one hand I felt incredibly relaxed and at peace, on the other I felt completely energized. It was the strangest of feelings.

As I left the studio, Hol and I walked back to our rooms in a content silence. My body felt lean and my muscles tight. I was feeling great! Call it the endorphins from a really good workout, or maybe a newly cleansed chakra? Whatever the cause, I can’t wait to feel this sensation again. This is one first impression I’m happy to hang on to! All the negative misconceptions I may have had regarding yoga have now been challenged, and I for one am looking forward to finally dispensing with them for good, in fact, I’ve already signed up for this evening’s Restorative Yoga Nidra class! This could be the beginning of a beautiful friendship.