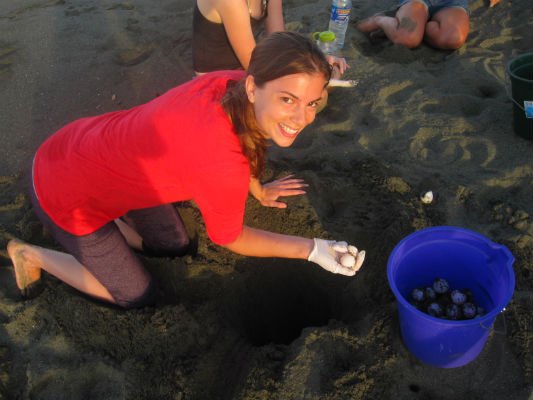 One of my favorite memories from my stay at Blue Osa was watching a bunch of baby sea turtles emerge from their shell and eventually make their way into the Pacific ocean.

I decided to participate in Osa Conservation’s sea turtle preservation program at Piro Research Station after hearing such wonderful things from other guests about The Turtle Getaway Package. I quickly found out why.

Even though I came prepared with trail snacks, a headlamp and rubber boots, nothing could have prepared me for the incredible journey I was about to have alongside guide/conservationist, Manuel Sanchez.

We leave the conservation base at 8 p.m. sharp for night patrol. After a 30-minute hike through the jungle, we find ourselves on the private, pristine Piro Beach on Costa Rica’s lush Osa Peninsula.

Our job for the next several hours is to lookout for Olive Ridley sea turtle tracks and mama sea turtles nesting on the beach.

If we are lucky enough to spot a mama nesting on shore, we will measure her carapace for research purposes and take note of where she lays her eggs. If a nest is too close to shore, it is considered vulnerable and we will relocate it to a nearby hatchery built by Osa Conservation.

We arrive on the beach and immediately remove our (drenched and muddy) rubber boots to begin our barefoot turtle-trek along the beach. There is something rebellious, yet soothing about walking barefoot under the moonlit sky.

The silver sky provides just enough light for us to witness the giant waves crashing beside us. No turtle sightings yet, but I’m certain I have been transported to a Jurassic Park set.

The beauty that surrounds me is surreal.

I gaze down and notice giant circular footprints in the sand. I nervously ask Manual if we’ve stumbled upon big foot. He laughs. “They are just water buffalo tracks,” he says.

Sure enough, we soon find ourselves practically face-to-face with the burly animal. He was just hanging by the river, minding his own business when our flashlight gave him a scare. He is confused to see us on his territory. We have a brief staring contest with the big buffalo and go our separate ways.

Manuel shows me the newly built sea turtle hatchery that can hold about 75 nests every year.

He tells me one nest of Olive Ridleys hatched earlier that day and it included four late bloomers that are ready to be released tonight. I put on my gloves and gently place the babies in a bucket to prepare them for their journey toward the ocean. 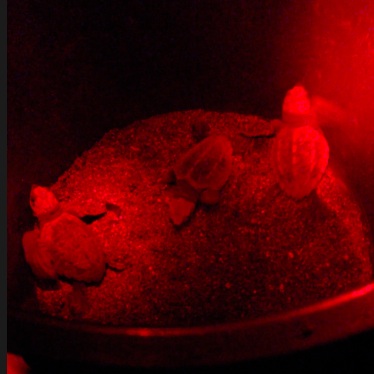 Four Late Bloomers are Ready to be Released

The staff and volunteers at Osa Conservation have worked hard to collect data to ensure these babies will be released in the spot where they were originally born. Hopefully, the female turtles will come back to that spot and give birth to continue the cycle of life. Once we arrive in the appropriate zone on the beach, we release them one-by-one. The baby Olive Ridley sea turtles safely make their way home.

After much patience and no turtle sighting, we make our way back to the research station for a few hours of rest so we can be ready for morning patrol.

After (much needed) coffee, we leave basecamp around 5:30 a.m. and head for the beach to help save more sea turtles.

The hike is just as beautiful (and a little less scary) in the daylight.

Even though we did not see any adult Olive Ridleys last night, plenty of turtle tracks suggest they did indeed visit. It’s as though the mamas waited for us to leave so they could nest in privacy.

We triangulate the nests that are in safe areas and relocate the vulnerable nests to the nearby hatchery.

The relocation process is quite tedious. We must dig up all the eggs, count them, delicately place them in a bucket, measure the depth and width, and save a little original sand in order to replicate it as much as possible in the hatchery.

A Haven For Turtles

I decide to plant my nest of about 70 sea turtle eggs in the sun. I have always wanted a bunch of daughters. 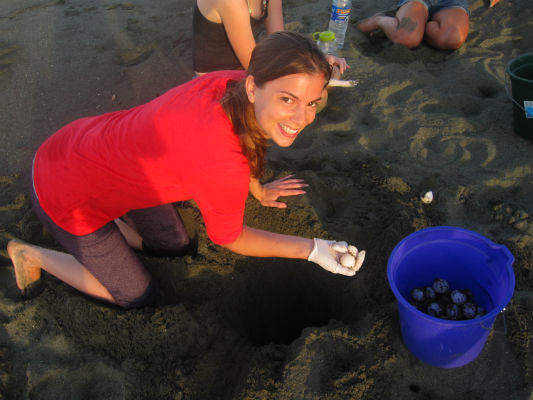 All of a sudden we see something moving at the corner of our eye. Turns out 64 baby turtles have hatched over night and are now ready to emerge. 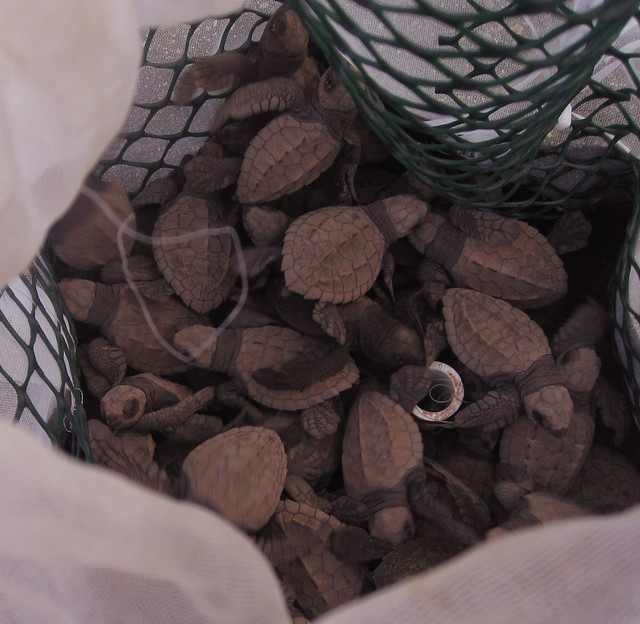 Photo by Lianne: 64 Olive Ridley Turtles are born in the hatchery

The tiny sea creatures wiggle around vigorously as if to say “Set me free now!”

So we gently measure them, place them in the bucket and walk toward the zone where they were once eggs. 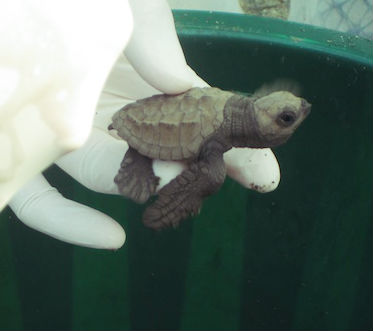 I delicately release all 64 turtles onto the sand. They instinctively know they have one mission and one mission only: make it to the ocean. We watch them awkwardly and adorably wiggle their way into their new salty home.

Photo by Lianne: The group of 64 Olive Ridley turtles make their way back home

The route home for these sea turtles is not an easy one. They are faced with many obstacles along the way, including man-made threats like fishing and poaching.

Luckily organizations like Osa Conservation are in place to help preserve these beautiful creatures of the sea.