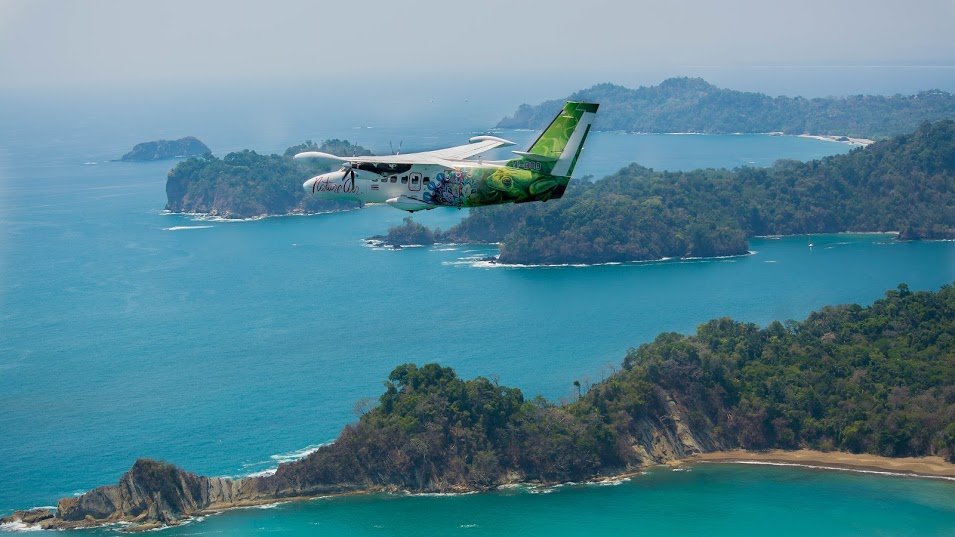 How to Get to the Osa Peninsula

Home › Our Stories › How to Get to the Osa Peninsula

Flying High via Cessna to the Osa Peninsula

Looking out of the little window of the Sansa airplane, the world’s first carbon neutral airline, my heart swells as we glide through the thin blanket of clouds. Below me, Costa Rica is spread out like a lush green felt carpet. It’s breath-taking. I’m on my way to Blue Osa Yoga Retreat to finally begin what I’d poured scorn on for so long. Yoga. Could this actually become a new significant part of my life?

Standing in line to check in with Sansa in San Jose airport at 5am in the morning, bleary-eyed and coffee deprived, my mood has definitely been better. The rucksack on my back, feeling strangely light for the first time in what seems like forever, is counteracted by my day sack, worn across my chest, now for the first time heavy enough to make me wonder if I accidentally packed a bowling ball. It’s all in an effort to meet Nature Air’s stringent weight policy. When you’re slap bang in the middle of a seven-month traveling trip there’s no way 15 kg is gonna cut the mustard.

Regardless, I’m confident I’ve made the 15kg cut. It took some pretty creative packing last night, sure, but as the couple in front of me are handing their luggage over the desk, I’m busy bicep curling my bag, trying to judge whether it feels the same as a 15kg dumbbell in the gym would in my hands. Handing over my passport, I place my rucksack on the scales and hold my breath. I can tell by her face, I didn’t make it, but it’s how far I didn’t make it by that surprises me, that is until she slaps a laminated sheet in my face and points at the fair prices/allocated weight breakdown. Seems I bought the cheapest, 15lb fare! I take my $30 fine like a man and move, rather sheepishly, on my way. For anyone following in these footsteps on their way to Blue Osa, do yourselves a favor, don’t confuse your pounds for kilos!

Thirty bucks out of pocket, I climb aboard the little shuttle bus, trying hard to think my happy thoughts, yoga style! I’m pretty sure yoga is going to be hard for me, trying to let go of that inner cynic that cries out its all spiritual mumbo jumbo. But then that’s the reason I’m doing this, to try and understand, what I have been at times, ignorantly dismissive towards in the past. Well that day has come around. The day I make my journey to Blue Osa Yoga Retreat to begin my path to enlightenment, mindfulness, and an all around better me…whatever that means.

The aircraft that my shuttle bus from Gate 12 has stopped in front of cannot possibly be my ride. Can it? It looks more like a crop duster it’s so small. Now I’m actually annoyed that instead of charging me money for being overweight, they didn’t just say “Sorry buddy, but we’re a little worried the old bird won’t get off the ground!”. If they had I’d probably have offered to take the bus, which costs around $6 but would end up using up 10 hours of your precious life. Makes my $99 fare sound like a bargain! So that’s when I started thinking that maybe this was a warm up lesson? Maybe this path the yoga community talk about, for me starts on a runway some 240 miles away from where I mistakenly assumed the starting pistol would be? Is this a life lesson I see before me? Open your mind to new experiences? Wasn’t that in essence what this whole thing was about? Suck it up Chris, get ON the plane.

Because in short, from the moment I was personally greeted by our captain as he squeezed his ample frame through the small gap between the passengers and the cockpit door, the experience was one of the most enjoyable I’ve ever had on a plane. Sure it was only 35 minutes spent in the air, although the entire journey, with two landings and two take offs will take an hour (you’ll stop at Golfito first), but when considering those take-offs, I didn’t even realize we were in the air, they were so smooth.

So having already wrongly judged this particular book by it’s cover, it felt good to be able to admit my mistake. Nice surprises can often be found through a leap of faith.

The Only way to Travel!

In my defense, I’m somewhat of a nervous flyer. I don’t know why; it’s not like I’ve been involved in any particularly hairy mid-air complications or electrical storms. One day I just got on a plane and didn’t feel at all comfortable. I don’t like turbulence, I really dislike the whole jet engine take-off thing, and I am most definitely NOT a fan of 40,000 feet!

Which I hope goes some way to explain why I could make such uneducated snap judgments based on absolutely no prior experience with light aircraft. When I stepped on board and counted 19 seats, I panicked when I really didn’t need to.

Flying such a small distance negates the requirement to fly so high, so the Sansa flights travel between 10 to 15,000 feet. At this height, at 6am on a beautiful, clear sunny morning, skimming just above the long wispy fingers of the Stratus clouds, looking down over the sun-drenched, mountain ringed basin of San Jose I’ll be honest, I totally forgot I was flying. You see, here lies the main benefit to flying at such a low altitude. At 30, 35 or 40 thousand feet, even with a completely sapphire sky, the earth below can mostly seem a little void of detail, washed out and unexciting. Be honest, on a long flight do you get yourself comfy and press your cheek against the window? Or do you plug in your headphones and watch that new Leo flick on the back of the person in front’s headrest. Magic Eightball says ‘you picked the latter’. Of course you did. But at this height, it’s like you have VIP seats, the best ones in the house! What better way to experience Costa Rica’s rich, diverse landscapes in all their greenery, than to have them slowly roll by beneath you in High Definition. Sprawling hills, dense rainforests, mountaintop lakes and gorgeous shorelines it’s all down there for you on a half an hour long tapestry. 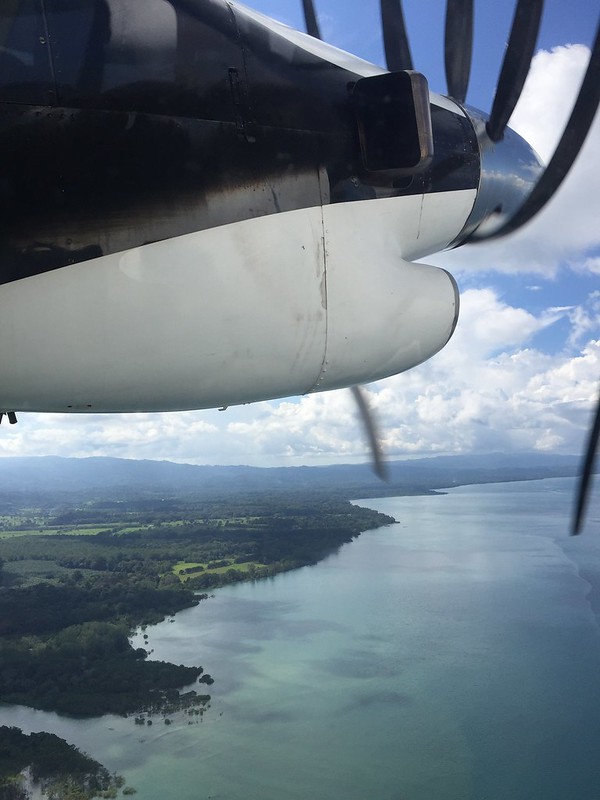 As we land, our captain pokes his head around the cockpit door. “Welcome to Puerto Jimenez” he beams. Outside, two staff in orange vests manage to both unload our baggage AND marshal the plane for takeoff back to San Jose, while a rank of taxi drivers waits patiently at the runway edge ready to pick up their customers. I believe it’s around $30 to Blue Osa. Fear not, the Blue Osa Yoga Retreat make a point of personally ensuring their guests arrive safe and sound, from runway to reception, all part of the service!

Welcome to the jungle. Welcome to Blue Osa Yoga Retreat.