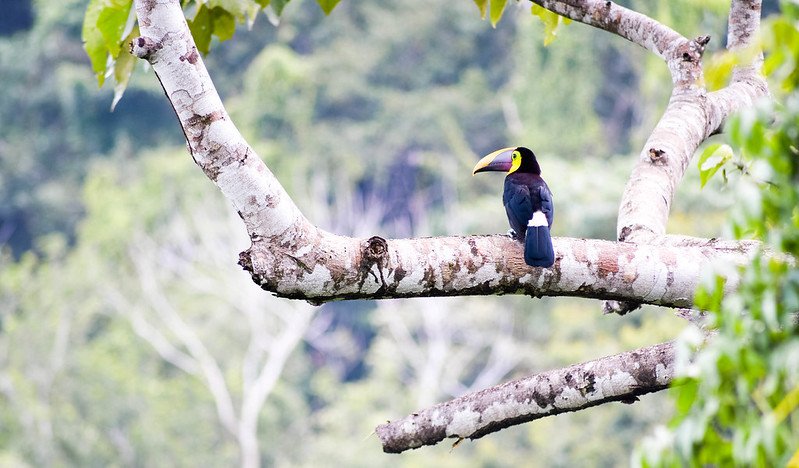 The confluence of the jungle and the ocean breeds life on a scale you cannot begin to fathom. The Costa Rican rainforest is one of the most bio-diverse places on the planet and no more than a stone’s throw away is the mighty Pacific. The ocean inhabits the majority of earth’s plants and animals, and being the largest of the five basins, the Pacific harbors life like no other.

Blue Osa is situated as a happy interlude between the two ecosystems, so life reveals itself in a plethora of creative ways.

Let’s take a look at some of the organisms you can expect to see on your trip to Blue Osa. 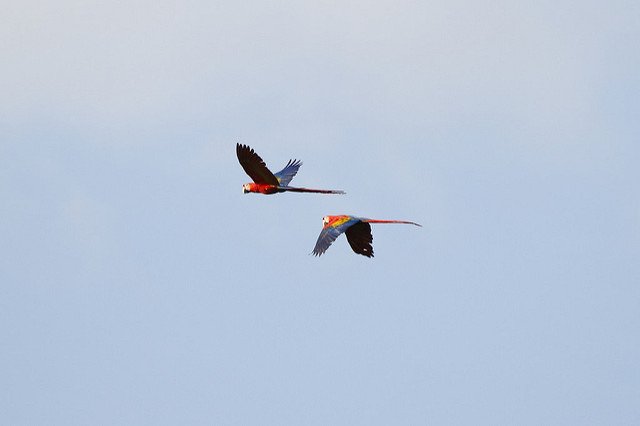 The Scarlet Macaw, with its vibrant plumage, can be seen flying around Blue Osa, usually in pairs. Scarlet Macaws are monogamous creatures and will mate for life.

You will often their squawks coming from the big Inga tree that stands between the ocean and the yoga studio or in the Beach Almond trees along the beach. 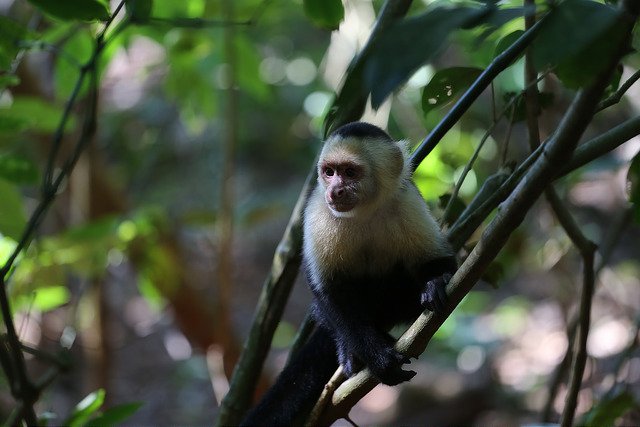 The White-faced Capuchin monkey is one of four types of monkeys native to the Osa Peninsula. With an all-black body and a white face, these monkeys are fairly easy to identify.

The white-faced monkey will spend their entire lives with their birth family so if you spot one, others shouldn’t be far away.

The White-faced Capuchin monkey is often trained as a service animal, instructed to assist quadriplegics with everyday living. And so if you’re interested in extending your gratitude on behalf of humanity, these creatures can usually be found playing in the trees behind the kitchen. 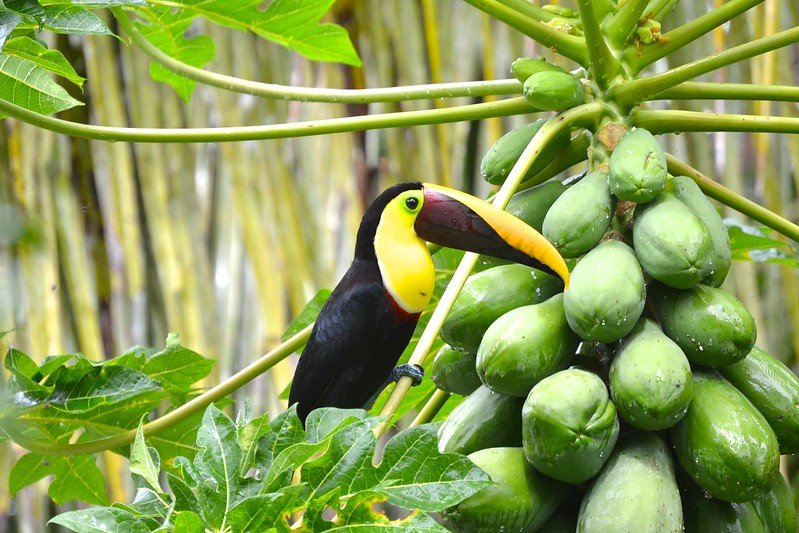 A very aesthetically interesting bird, the Chestnut-Mandibled Toucan can be identified by its bright colours and its disproportionately large bill. Often spotted in pairs, these birds don´t seem to care for flying all that much.

They will rarely fly more than 300 ft at a time, and can usually be spotted gorging on fruit somewhere with their mate. A pair of toucans have taken to occupying the tall tree to the right of the spa.

If you are quiet and patient, you can often monitor them from the comfort of the pool.

More likely to be heard than seen, the appropriately-called Howler monkey earned his name through the low-pitched wailing he produces.

With a loud roar that can travel miles through the jungle, The Guinness Book of World Records has duly credited the Howler as the loudest of land animals. Often you can hear his calls near dawn or dusk.

Another suitably-named creature, the black and orange color of Gecarcinus quadrates, or “Halloween Crab” distinctively brings to mind the 31st of October. This nocturnal crustacean can be found using his purple claws to dig deep burrows – up to 1.5 meters – anywhere along the beach. To catch him in the act, take a flashlight down to the beach and search near the foliage. 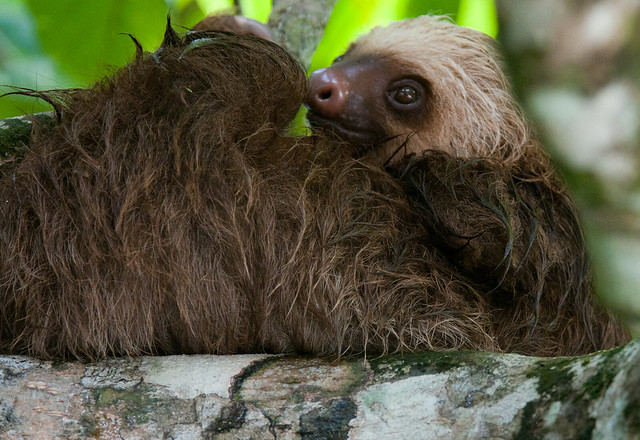 One of the more timid inhabitants of the jungle, Hoffmann´s Two-toed sloth is quite the anomaly.

He will spend the majority of his life alone, hanging upside-down, while exerting himself no more than absolutely necessary. His eyesight is poor, as is his hearing. And should he decide to die, he will most likely continue to hang stoically, as he did while he was living.

Despite a lack of movement, the sloth is one of the most fascinating animals to witness in action, so to speak. With lethargic, yet precise movements, this animal appears to be forever stuck in a reality of slow motion.

Since he has such an inherent lack of motor skills the sloth´s primary defense mechanism is camouflage. So should you decide to search for him, look high in the trees with a keen eye. Once you spot him, go gather your friends, he´s not going anywhere anytime soon.

One of nature’s truly remarkable spectacles, the luminous glow of the phytoplankton is eerily beautiful. When the plankton becomes disturbed, by say a passing swimmer, they produce a blue luminous glow that flickers then disappears into the night. The end result is a network of light that follows your movements as you wade through the water. This enigmatic display of light is called bioluminescence, a chemical reaction that acts as a defense mechanism for organisms such as plankton, fireflies, and jellyfish. To see the luminous plankton at Blue Osa, retire to the beach at night when the moon isn’t too bright. For best results, it is recommended that you enter the water and swim around. Though it does require a bit of patience and luck to witness this natural phenomenon, the show is well worth it.

My list is comprised of seven organisms that you are likely to see while here, but the Osa Peninsula is home to more creatures than you can possibly imagine.

Every day I stumble across something that fascinates me dearly. Whether that be crabs who can vertically suspend themselves on the wall, ants who look like they could carry you away at will, lizards with NFL Combine agility, or a bird that looks like he was colored by a child, these species keep presenting themselves.

And even more, I am constantly coming across organisms I didn’t even know existed. Species, who, somewhere along their millions of years of evolution, decided to branch off just slightly from one another. The lizard population alone is comprised of more variations than I can count.

Blue Osa truly is a magical place, and it’s not just the yogis who think so.

While you’re transitioning from your cats to your cows you most likely will hear the ostentatious squawks of the macaws or the undulating roar of the ocean in the background, reminding you that you truly are submerged in a healthy, serene environment. So come to Blue Osa and witness some of the creative variations life has conjured up. That child’s pose will likely become a childlike fascination as you experience the vast beauty of life’s talents.

See All That Nature Has To Offer At Blue Osa!
Tags: Discover Costa Rica, Eco Resort, Experience in Costa Rica, Fun in the jungle, nature