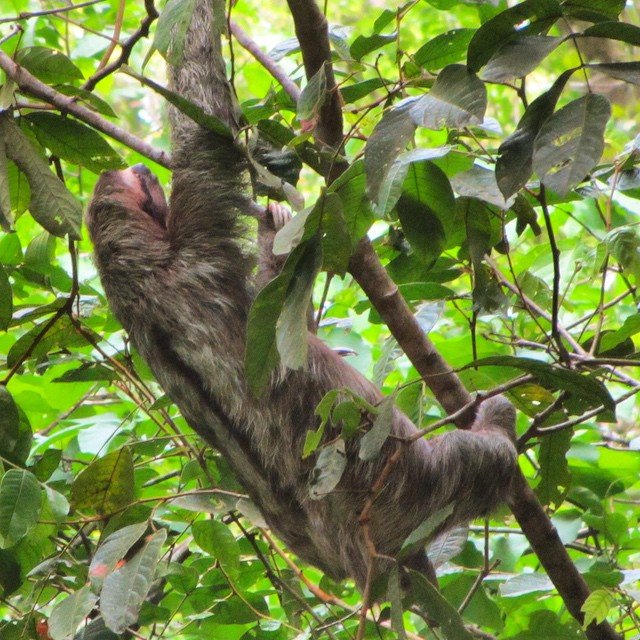 The 5 am alarm seems a little severe when it sounds on a Saturday morning – my official day off. I try (unsuccessfully I may add) to ignore it before Holly, my girlfriend, fiancé and foreman for the rest of all eternity, drags me out of bed and tells me to get ready. Having spent three weeks within the safe confines of Blue Osa’s walls, the two of us have finally decided to do some exploring.

After an early breakfast, kindly provided by the kitchen staff, we jump into the back of our guide Fillo’s pick-up and roll out the Blue Osa’s gates. The sun is out with not a cloud in the sky even though it’s rainy season, so the jungle is a couple of shades greener than normal making it look extra especially lush. What a day for an adventure! 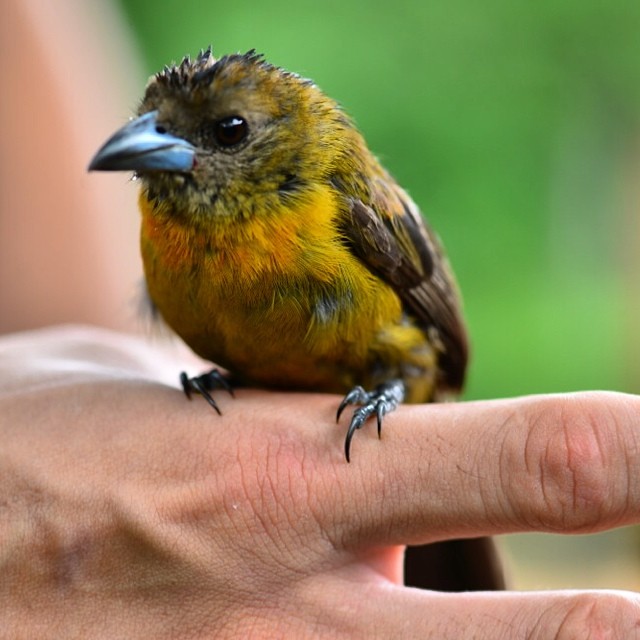 Matapalo is only a twenty-minute drive up the road from Blue Osa. It has a fantastic beach from what I’m told, one especially worth checking out if you like to surf, although that’s not the object of our affections today. No, today’s mission statement is to go on a jungle hike with an eye to soaking up some of the Osa Peninsula’s much vaunted biodiversity. 2.5% of the entire planets’ to be exact. I feel like I’m about take part in my very own nature documentary, something from the Discovery Channel narrated by Sir David Attenborough! Time to peel back those eye lids! My mission today is to see one of the jungle’s greatest hide and go seekers…the beautiful, elegant, and extremely shy, three-toed Sloth!

Leaving the car on the side of the road we set off on a short walk towards the entrance to the jungle. Before we even get there we’re treat to an acrobatics spectacle worthy of any Big Top. We watch as a couple of Spider Monkeys launch themselves from atop a high branch right across the road to free fall into another tree like a family of death defying trapeze artists.

As we get closer to the start of the trail Filo stops every now and then to provide commentary on the the flora and fauna we pass on the roadside. It’s clear from the beginning not only how knowledgeable he is on the subject but also how deeply he cares about his surroundings. He takes an obvious great sense of pride that shines forth whenever he is able to introduce the next treasure on our path. But it would be a criminally unfair synopsis of Filo’s talents to simply describe him as a walking textbook of knowledge. This man is Blue Osa’s answer to Doctor Dolittle! Seriously, we would be strolling down the trail, talking away and he would suddenly stop, prick his ear to the forest canopy and point at a leaf covered branch. It seemed we were gazing up at nothing until Filo produced an unbelievably life like bird call that would incredibly then be answered! He has them all, whether it’s Howler, Spider, and Titi, or blue crowned Mot Mot or Slaty tailed Trogon. His repertoire has no end! 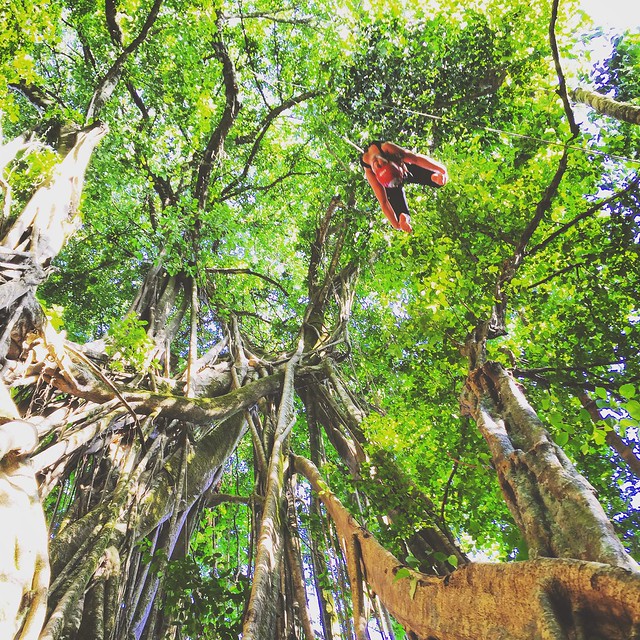 Once we’re out walking through the jungle one of the first things we come across is huge ant nest. Lines of worker ants carrying leaves above their heads, stream into the myriad of different holes leading back into the nest. Fillo gestures for us to watch. He stamps his foot once, twice, three times and then points at the nearest hole. Sure enough, a couple of ants five times the size of their worker brethren emerge on a reconnaissance mission to seek out the disturbance. It’s absolutely fascinating to see the jungles little day to day eco systems and societies going about their day as you watch on. A little further down the trail and Fillo’s extra-sensory perception kicks into high gear once again as he suddenly flips a leaf to reveal a tiny brightly coloured frog. Though it’s green and red colouring may seem beautiful to the eye Fillo warns us that its skin carries an extremely deadly secretion. The Poison dart frog had to get its name from somewhere after all!

It wasn’t all just about the fauna though. Amongst the many plants and trees that Filo pointed out I found the huge Strangler tree, the Kerosene Tree, and the Milk tree to be the most fascinating. We were even invited to taste the sweet milk like sap of the Milk Tree, which true to its name, tasted exactly like condensed milk. 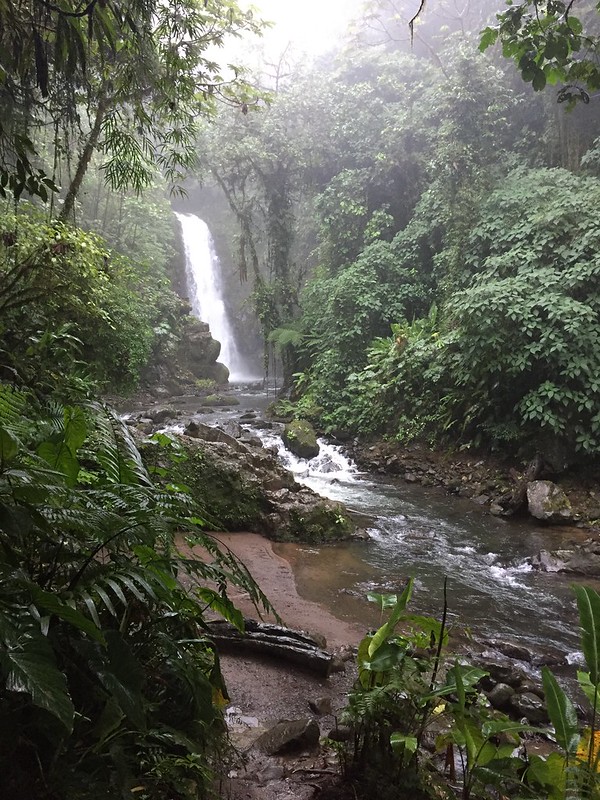 The air inside the jungle is hot and humid. As we progress further down the trail we’re all soon sweating profusely. Thankfully we arrive at two separate opportunities to shed our clothes to reveal our hidden swimmers and dive into the deep cool water. It serves as the perfect way to regulate our body heat and sets us up ready to finish off the last leg of the hike as we pick our way slowly across the rocks following the creek. Fillo stops us and warns us to keep a close eye on the floor. The one thing Costa Rica does have its fair share of is potentially deadly poisonous snakes. Although Fillo points out that he has never had a problem on any of his tours it’s only prudent to respect the habitat you find yourself in and realize that at any time you could be putting your foot directly into someone’s living room!

The creek eventually opens out onto a trail that brings us back around to the start of the hike. Our adventure in the jungle is at an end. Thankfully we came across no snakes but unfortunately the same could be said about those illusive Sloths! No matter, there will definitely be a next time! Until then Mr Sloth, I’ll keep my eyes peeled!

Get out and discover nature at Blue Osa Yoga Retreat + Spa

Chris Barkess is a blogger and aspiring author in his thirties. He also drives trains in his hometown of Newcastle, England.
His love of travelling brought him together with his fiancé, Holly, another like-minded travel nut, and the love of his life. Together they embarked on an adventure in 2015 to explore Latin America where they fell in love with Blue Osa Yoga Retreat & Spa.
Aside from writing – his undisputable first love, Chris enjoys reading, running, football, and being fully immersed in nature. He is a self-proclaimed Stephen King fanatic.
Chris admits to having been initially sceptical and openly dismissive of Yoga until he realised the benefits it had to offer him; physically, mentally and spiritually. He now recognises the depths to his ignorance.
“The ultimate ignorance is rejecting something you know nothing about, yet refuse to investigate” – Dr. Wayne Dyer