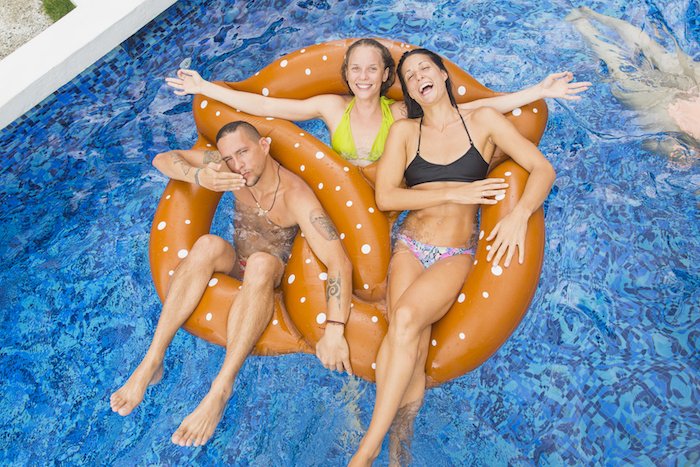 Many people have asked me how we made our yoga retreat successful. The Blue Dream Yoga Retreat originated in February of 2014 during a Skype conversation with my yoga colleague Ewa. She said, “Sounds crazy, let’s do it!”

Nevertheless, it began with a lot of doubts, fear and uncertainty. Looking back I still can’t believe we pulled it off. Many yoga instructors, who have been teaching for at lot longer than us, don’t even host retreats. So can we???!

The sting of doubt began to creep in. “Is 4 months enough time to plan and advertise the retreat?” “What if nobody signs up???” “Where do we even begin??”

But eventually everything fell into place and we ended up with a successful retreat of 14 yogis coming to Blue Osa for an unforgettable lifetime adventure.

Here is how we did it:

Networking is my favorite thing to do. It’s basically talking to people, creating connections, staying in touch, sharing photos, moments, comments, likes…networking happens organically every day if you are open to meeting new people and getting to know individuals who cross your path. You never know what might come out of it. Both Ewa and I taught a lot of classes in Miami and we did a really good job at keeping in touch with our students. We use mainly Facebook and Instagram to connect and share. Once we thought about the retreat and decided we were going to go for it, we put a lot of effort into reaching out to people directly: in person, over Facebook, through email and any other way we could think of connecting. Basically we just wanted to share our news with everybody.

At Yogi Aaron’s suggestion, Ewa and I hosted a Costa Rica Party where we served smoothies and did some casual yoga with yogis and friends. The party was a great success because people, who were considering the retreat, got a chance to see the vibe we were offering and to meet other people who were already signed up. We had 3 sign-ups after that party.

Finally, we made our students feel special, safe and welcome. Giving everyone a lot of personal attention even before the retreat begins is hugely important because it shows that you care and are organized. On the first night of the retreat, we welcomed each student individually and gave everyone a chance to get to know one another other during a group sharing game. So never pass on a chance to greet, meet and connect with people. You never know who will surprise you and be the one to sign up for your next retreat.

Be clear on what you are offering and your market

Ewa and I knew right away that the type of person who would want to come to our retreat were those with busy schedules, possibly a 9-5er; who needed a getaway to de-stress, relax, and let go in a beautiful setting while still feeling healthy, eating delicious food to nourish the body, and practicing yoga for the soul.

We also knew that the retreat was for people who perhaps do not like the idea of traveling alone but want to explore beautiful, exotic locations. We organized everything for the retreat and helped people with any question they had, thereby making it easy and accessible. Also, we sensed that this retreat could provide a great opportunity for people to make new friends and to take a social vacation. Surprisingly enough, in this modern world, it is tough to make new friends especially if you are feeling introverted. People wonder around with their faces glued to their phone and their ears plugged up with headphones! We knew that this retreat would offer people, who might otherwise never speak to each other in their daily routine, the opportunity to get to know others. What a great gift it has been for us to get to know each other on a deeper level and to share unforgettable memories.

One of the most important asset to have in life (and while leading a yoga retreat too) is flexibility–of spirit as well as body. Before the retreat, we had people cancel, people sign up at the last minute, and some unexpected turn-of-event–such as one of the guests injuring her foot three days before the retreat and wondering if she should still come. We knew it was all going to work out. We did not stress over a cancellation or ever question what was going to happen next. We had faith. And indeed we were humbled and pleased to have had 14 sign-up for our retreat which was actually more than we had hoped for in our very first retreat. During the retreat we kept focused on our practice and teaching but were also relaxed and enjoyed ourselves. We would wake up early every morning to do our own practice and mediation, staying centered before teaching our group class, so we could be more aware of the group’s needs and be prepared for anything.

Plan, but not too much

When thinking about the retreat, it seemed tempting to focus solely on the asana practice and the beauty of Blue Osa, but there’s much more to retreat programming than that. We wanted our retreat to be somewhere between structured and loose. Ewa and I have taught together and are comfortable with the various levels and differing style of yoga that our students practice; and we advertised our retreat accordingly. We offered daily yoga but there are other optional activities: surfing, hiking and taking treatments in the amazing Blue Osa Spa. We also wanted to leave time for guests to read, chill by the pool, take a nap or wonder off to the beach.

We planned our classes and focused on themes for students with various levels of experience and enthusiasm.

In this case, the experience level of our group was mixed–we had some advanced yogis as well as some students who want to start their practice and see what yoga is all about. We offered some beginner classes, some stronger flow, some workshop style and some restorative classes so as to accommodate a broad range of needs.

We did not plan everything to a ‘t’ because we wanted to leave space to see how every day felt. Feeling the energy level of the group is very important. Sometimes, plans don’t always work out and you have to find a more appropriate approach to suit the situation. Planning is good but going with the flow is fundamental.

Ewa and I compliment each other beautifully in the way we work, but it took constant communication and countless Skype conversations to get to that point. While our teaching styles share some common themes, we teach very differently, and so we had to find the balance between what each of us wanted to share and what we thought people wanted to get from the retreat. As far as the “work” to produce and organize the retreat, we split duties. I took responsibility for more of the social media and advertising aspects of the retreat while Ewa did more ‘in-person’ outreach as well as the accounting and payments. We jointly handled the emails. This has been an incredible learning experience for both of us. It’s about holding your ground while understanding the other person’s perspective–giving in when appropriate or finding another solution altogether.

Ewa and I know that this will be the first of many retreats that we will lead in the future. It’s just going to keep getting better every time 🙂

Ready To Lead Your Yoga Retreat To Blue Osa?

Valentina was born and raised in Italy and later moved to different parts of the US. She is a yogi, a runner, a traveler, an Italian foodie, a chocolate lab lover and a daydreamer. Today she finds herself being belonging-free, on the adventure, living her life authentically and to the fullest in Costa Rica as a volunteer at Blue Osa Resort&Spa. Her greatest treasures are the friends she has acquired all around the world who always offer a shoulder (and a couch) to lean on and northern California live music festivals in the woods.